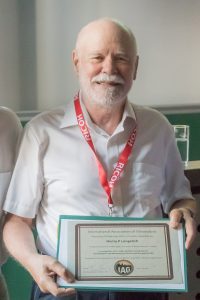 Henry had joined the Department of Earth Sciences at Memorial University as an assistant professor in 1978 where, for over 25 years, he plied his trade as one of the world’s premier analytical geochemists. Henry and his group systematically explored and unravelled the complex physical and chemical processes, such as elemental fractionation, that occurred as laser energy coupled to solid materials. In 1993 they were awarded the Hawley Medal of the Mineralogical Association of Canada for the best paper in their Journal in 1992 entitled The application of laser ablation microprobe-inductively coupled plasma-mass spectrometry (LAM-ICP-MS) to in situ trace element determinations in minerals.