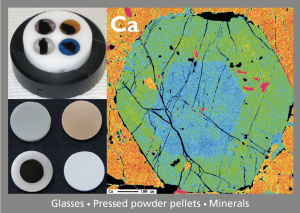 Reports for G-Probe rounds 1 and 2 were based on the format adopted for the GeoPT programme at that time, with tabulations of z-scores as a means of performance assessment.

In contrast, the legacy reports for round 5 onwards contain simple tabulations of the data reported by participating laboratories with multi-coloured diagrams showing the distribution of data by technique. They do not contain z-scores nor any other assessment of the quality of the data. Moreover, the “assigned values” do not have the same meaning as defined in the GeoPT protocol. For G-Probe these target values were obtained from one or two laboratories and are different from the median values of all participants.

From round 23 onwards, the operation of G-Probe has been harmonised with that of the GeoPT programme, with an online web interface for data reporting, the use of robust statistics to derive consensus values and individual z-scores issued. More details are available at www.gprobe.info

“Year” is the year the report was released. The epoxy mounts for most rounds were given a unique colour to aid identification. Where the powdered form of a material was also distributed as part of the GeoPT scheme the relevant round number is given.  Where no information is available, this is indicated by “-“.